The Wizard of Oz

The Wizard of Oz (is the) most 'influential' film of all time according to network science...


influential to others making movies, that is:


The Wizard of Oz, followed by Star Wars and Psycho, is identified as the most influential film of all time in a study published in the open access journal Applied Network Science.

Researchers at the University of Turin, Italy, calculated an influence score for 47,000 films listed in IMDb (the internet movie database). The score was based on how much each film had been referenced by subsequent films. The authors found that the top 20 most influential films were all produced before 1980 and mostly in the United States. Read more at: https://phys.org/news/2018-11-wizard-oz-influential-network-science.html#jCp

here's a short snip from the film.

by the way: Internet archives is asking for donations. Just in case you have money left over
Posted by Nancy Reyes at 10:53 AM No comments:

Email ThisBlogThis!Share to TwitterShare to FacebookShare to Pinterest
Labels: films

There seems to be a bit of sarcasm about the guy (a nutcase? A saint?) who tried to reach some very primitive tribes to preach the gospel.

The tribe was left in forced isolation because of the bad results of those tribal members living on the other islands, where the natives died off from western diseases, alcoholism, assimilation, or intermarriage, and lost their heritage.

But isolation? Doesn't that take away the choices of these people (and are the people chosing this, or are the leaders madmen who enjoy bossing and terrorizing those under them?). One wonders how many would escape if given the choice.

If I am sarcastic it is because this "keep them isolated so they can live in their own culture" was the idea behind Apartheid in South Africa: don't force the black African to become white, let him live in his traditional ways. Of course, what happened is a lot of them chose to change.

when two cultures meet, the problem we missionaries face is to help the culture keep their good traditions while introducing them to the good things of the new culture. 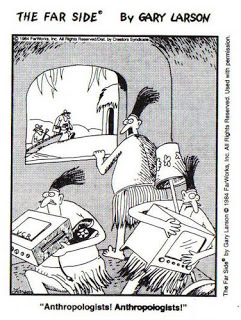 actually that cartoon is out of date: in Today's world, even isolated tribal people in the Amazon or Africa have cellphones. Here is a photo of an Amazon Indian using her cellphone to document the environment:


the colonial stories of horrific exploitation are many, but the pre colonial history of exploitation by locals to other locals are usually left out of the story.

You think Apartheid was bad? How about Shaka Zulu or Mzilikazi's many atrocities? (I always thought the rarely covered story of Mugabe's genocide against the Ndebeli might have been partly caused because the larger Mashona tribe remembered when they were the victims).

as to "missionaries": The press acts as if they are assholes preaching a foreign gospel, but usually they also bring modern medicine and literacy.

In Rhodesia, with a white apartheid government, we were assisted in our public health work, but on the other hand, we were greatly disliked because we also fought for the human rights of local people against the exploiters... and this is true, be it against the racist regimes in Africa, the drug cartels of Latin America, or those who exploit and steal the landn from the poor here in the Philippines. LINK LINK2

and even the gospel can change culture for the better:

This is from NatGeo about why a tribe in Nagaland became Christian:

and not just primitive headhunters can be pacified and leave their evil ways:

The Economist (UK) has an article about gang members in El Salvador leaving their life of crime and violence by joining Pentecostal (Protestant) Christian churches.
Posted by Nancy Reyes at 9:45 AM No comments:

sermon of the day

Kindness is in our power even when fondness is not.
~Henry James~

Compassion is language the deaf can hear and the blind can see.
~Mark Twain~

Today I bent the truth to be kind, and I have no regret,
For I am far surer of what is kind than I am of what is true.
~Robert Brault~

Treat everyone with politeness,
even those who are rude to you,
not because they are nice but because you are.

Never look down on anyone unless you are helping them up.

A good character is the best tombstone.
Those who loved you will remember.
Carve your name on hearts, not on marble.

If you want others to be happy, practice compassion.

I always prefer to believe the best of everybody.
It saves so much trouble.
~Rudyard Kipling~

Don't be yourself — be someone nicer.

Never miss an opportunity to make others happy,
Even if you have to leave them alone in order to do it.

There is one word that may serve as a rule for all one's life: Reciprocity.
~Confucius~

Grownups know that little things matter and that
Relationships are based on respect.

Don't wait for people to be friendly.  Show them how.
~Henry James~

The most important trip you may take in life is
Meeting people halfway.
~Henry Boyle~

When I was young, I admired clever people.
Now that I am old, I admire kind people.
~Abraham Heschel~

If we should deal out justice only in this world,
Who would escape?
No, it is better to be  generous
For it gains us gratitude.
~Mark Twain~

Be  tender with the young ,
compassionate with the aged,

You cannot do a kindness too soon for you never know
How soon it will be too late.
~Ralph Waldo Emerson~

By swallowing evil words unsaid,
no one has ever harmed his stomach.
~Winston Churchill~

Real generosity is doing something nice for someone
Who will never find out.


There are only seven colors in the rainbow.Look what the Master Artist has done with them


your email of the day from Tia Maria
Posted by Nancy Reyes at 8:46 AM No comments:

We elders weren't green back then Bah Humbug

Checking out at the store, the young cashier suggested to the much older lady that she should bring her own grocery bags, because plastic bags are not good for the environment.

The woman apologized to the young girl and explained, "We didn't have this 'green thing' back in my earlier days."

The young clerk responded, "That's our problem today. Your generation did not care enough to save our environment for future generations."

The older lady said that she was right  our generation didn't have the "green thing" in its day. The older lady went on to explain:
Back then, we returned milk bottles, soda bottles and beer bottles to the store. The store sent them back to the plant to be washed and sterilized and refilled, so it could use the same bottles over and over. So they really were recycled. But we didn't have the "green thing" back in our day.

Grocery stores bagged our groceries in brown paper bags that we reused for numerous things. Most memorable besides household garbage bags was the use of brown paper bags as book covers for our school books. This was to ensure that public property (the books provided for our use by the school) was not defaced by our scribblings. Then we were able to personalize our books on the brown paper bags. But, too bad we didn't do the "green thing" back then.

We walked up stairs because we didn't have an escalator in every store and office building. We walked to the grocery store and didn't climb into a 300-horsepower machine every time we had to go two blocks. But she was right. We didn't have the "green thing" in our day.

Back then we washed the baby's diapers because we didn't have the throw away kind. We dried clothes on a line, not in an energy-gobbling machine burning up 220 volts. Wind and solar power really did dry our clothes back in our early days. Kids got hand-me-down clothes from their brothers or sisters, not always brand-new clothing. But that young lady is right; we didn't have the "green thing" back in our day.

Back then we had one TV, or radio, in the house -- not a TV in every room. And the TV had a small screen the size of a handkerchief (remember them?), not a screen the size of the state of Montana. In the kitchen we blended and stirred by hand because we didn't have electric machines to do everything for us. When we packaged a fragile item to send in the mail, we used wadded up old newspapers to cushion it, not Styrofoam or plastic bubble wrap. Back then, we didn't fire up an engine and burn gasoline just to cut the lawn. We used a push mower that ran on human power. We exercised by working so we didn't need to go to a health club to run on treadmills that operate on electricity. But she's right; we didn't have the "green thing" back then.

We drank from a fountain when we were thirsty instead of using a cup or a plastic bottle every time we had a drink of water. We refilled writing pens with ink instead of buying a new pen, and we replaced the razor blade in a razor instead of throwing away the whole razor just because the blade got dull. But we didn't have the "green thing" back then.

Back then, people took the streetcar or a bus and kids rode their bikes to school or walked instead of turning their moms into a 24-hour taxi service in the family's $45,000 SUV or van, which cost what a whole house did before the "green thing." We had one electrical outlet in a room, not an entire bank of sockets to power a dozen appliances. And we didn't need a computerized gadget to receive a signal beamed from satellites 23,000 miles out in space in order to find the nearest burger joint.

But isn't it sad the current generation laments how wasteful we old folks were just because we didn't have the "green thing" back then?

Please forward this on to another selfish old person who needs a lesson in conservation from a smart ass young person.

We don't like being old in the first place, so it doesn't take much to piss us off... Especially from a tattooed, multiple pierced smartass who can’t make change without the cash register telling them how much.


your email of the day from TiaMaria
Posted by Nancy Reyes at 8:41 AM No comments:

a lot of Steve Bannon's talk sounds like the compaints of occupy Wall street.

and of course, the press hasn't noticed: Trumpie boy is actually a Blue dog Democrat: it was Hillary who was beloved of the rich investors.

Posted by Nancy Reyes at 2:47 PM No comments:

the weekly standard has an article on Christopher Tolkien, the last Inkling, who has officially retired at age 94, after editing his father's notes and stories and releasing them for publication in many books, including Unfinished tales of Middle Earth (link link2) , and the History of Middle Earth.

the last of these books was just published, but it was begun during World War I, and of course a shorter version is in the Simarillion. 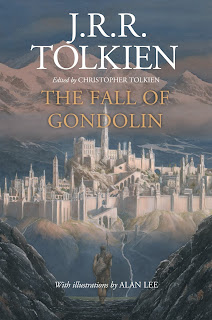 His links to his father's literature go back to his childhood:

It is work that has spanned Christopher Tolkien’s life. He started editing at just 5 years of age, catching inconsistencies in the stories his father told at bedtime. When those stories became The Hobbit, Christopher’s father promised him tuppence for every mistake he noticed in the text. A few years later, Christopher was typing up manuscripts and drawing maps of Middle-earth.

the article doesn't mention why: Christopher had developed rheumatic fever and was placed on prolonged bedrest. His father did much of his tutoring work at his home office (supervising students) so kept him company in his spare time.

Posted by Nancy Reyes at 8:42 AM No comments: