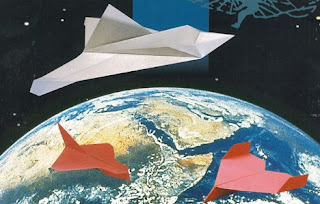 PinkTentacle blog reports that:
Researchers from the University of Tokyo have teamed up with members of the Japan Origami Airplane Association to develop a paper aircraft capable of surviving the flight from the International Space Station to the Earth’s surface.

The researchers are scheduled to begin testing the strength and heat resistance of an 8 centimeter (3.1 in) long prototype on January 17 in an ultra-high-speed wind tunnel at the University of Tokyo’s Okashiwa campus (Chiba prefecture). In the tests, the origami glider — which is shaped like the Space Shuttle and has been treated to withstand intense heat — will be subjected to wind speeds of Mach 7, or about 8,600 kilometers (5,300 miles) per hour.
Posted by Nancy Reyes at 2:14 PM

Email ThisBlogThis!Share to TwitterShare to FacebookShare to Pinterest
Labels: arts and craft