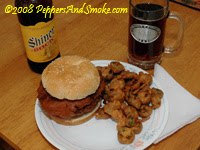 Cheeseburger in a can!

MRE are usually joked about as "Meals Rejected by Ethiopians"...and are so bad that feeding them to prisoners in Guantanamo is apparantly considered a form of torture...

0720: Detainee returns from bathroom break. He refuses a meal and states he is on
hunger strike.
0725: Detainee states he will eat meal, but after that he’s going on hunger strike, one
hand is uncuffed to allow him to eat.
0755: Detainee finishes meal and states again he is going on hunger strike. The detainee
ate the entire MRE plus an extra cereal bar.
0800: SGT A continues with 9/11 theme.
0830: Detainee given 2 hours of rest. Interrogations will resume at 1030.
0835: Observations – Detainee attempts to control the interrogation by complaining
about his treatment, his mental illness, and his separation from his brothers in
Cuba. When shown articles of 9/11, the detainee looked at pictures attentively.
The detainee was repeatedly told that he is a man, and part of being a man is
accepting responsibility for your actions. Whenever the detainee said that “it is
God’s will for him to be sitting in front of me, having to acknowledge and accept
responsibility for his actions. The detainee went as far as to state that his religion
forbids him to even speak to a woman.