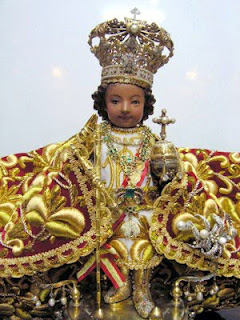 The Sto Nino of Cebu->


Yup. Church full today, with lots of kids holding their "Santo Nino" statues. Outside, there is a band, dressed in red, and the float with the Sto Nino on top.

It's children's day, actually the day to celebrate Jesus as a child: reminding us that the Great creator of the universe was once a small boy living in an ordinary family, and that although the rich and famous are considered important by the world, that to God, the most important are the small and helpless: The children. 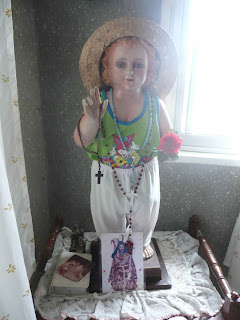 Unlike the sedate "Infant of Prague" found in US Churches, or even the kingly but smiling Sto Nino of Cebu, here the Santo Nino is a mischevious looking kid with his hands up, as if he's asking you to pick him up. I once spotted him in a local shop "dressed" in children's shorts with a baseball cap. (photo credit)

Often he wears a broad brim hat too, which is the "Spanish" version. You see, the StoNino in Spain and New Mexico is attached to a legend where a small boy brought Catholic prisoners in a Moorish prison some bread to eat. So the Nino is the patron of prisoners and miners.

Since Magellan left a statue of the Sto Nino in Cebu, they have a huge fiesta there.


El Nino is also associated with the black faced Atiatihan festival.
This fiesta predates Christianity, when the Ati tribe left the Panay Malays settle there, so everyone wears black face of the Ati tribe.

So another day, another fiesta.
Posted by Nancy Reyes at 10:37 AM

Email ThisBlogThis!Share to TwitterShare to FacebookShare to Pinterest
Labels: philippines