RandomGoodStuff has some great photos of NYCity, from street food  (YUM! Pretzels and chilidogs!) to street views. 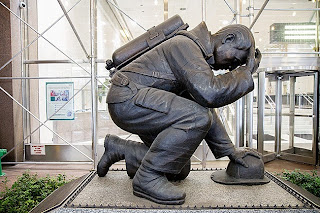 But he included this photo, that I had never seen before.

No, he is not "Tebowing" he is genuflecting, which is what Catholics do in front of the altar when we enter into the seats at church (the gesture was copied from the single knee kneel done in front of the emperor in ancient Rome). I always wondered where Tebow learned how to do it: presumably from the heathen Catholics who his family was trying to convert when they lived in the Philippines.

Well, anyway, I just assumed that it was a 9-11 memorial, but I was wrong.

In front of the Emigrant Savings Bank building on 43rd Street, you’ll find a statue of a kneeling fireman.  But it’s not an ordinary statue.
In late 2000, the Firefighters Association of Missouri had commissioned Matthews International Corporation of Parma, Italy to build the statue.  The statue arrived at JFKAirport on September 9, 2011.  And we all know what happened 2 days later.  As a tribute to the many FDNY firefighters who lost their lives on that fateful day, the Missouri firefighters and the manufacturer donated the statue to New York City.  It had several homes over the next decade, and in September of last year, it was moved to its current location.
It’s very difficult to read the Firefighter’s Prayer in this photo, so I’ll repeat it here:

When I am called to duty, God
Wherever flames may rage, give me the strength
To save some life whatever be its age.
Help me embrace a little child before it is too late,
Or save some older person from the horror of that fate.
Enable me to be alert and hear the weakest shout,
And quickly and efficiently to put the fire out.
I want to fill my calling and to give the best in me,
To guard my every neighbor and protect his property.
And if I have to lose my life, according to our fate,
Please bless with your protecting hand
My children and my mate.
Many thanks to the generous manufacturer and the firefighters of Missouri.