The immense creature, which has razor-toothed suckers and eyes the size of dinner plates, has been the subject of fables and fairy tales since ancient times. The Norse legend of the sea monster and the Scylla from Greek mythology might have derived from the giant squid.


Below the thunders of the upper deep,
Far far beneath in the abysmal sea,
His ancient, dreamless, uninvaded sleep
The Kraken sleepeth: faintest sunlights flee
About his shadowy sides: above him swell
Huge sponges of millennial growth and height;
And far away into the sickly light,
From many a wondrous grot and secret cell
Unnumbered and enormous polypi
Winnow with giant fins the slumbering green.
There hath he lain for ages and will lie
Battening upon huge seaworms in his sleep,
Until the latter fire shall heat the deep;
Then once by men and angels to be seen,
In roaring he shall rise and on the surface die.

While millions of people around the world will enjoy, or endure, a Burns Night helping on 25 January, those in the US who want to celebrate Scotland's national bard in the traditional manner are compelled to improvise.
Some choose to stage offal-free Burns suppers, and for most people not raised in Scotland, the absence of the dish - comprising sheep's "pluck" (heart, liver and lungs) minced with onion, oatmeal, suet and spices, all soaked in stock and then boiled in either a sausage casing or a sheep's stomach - might be no great hardship.
But for many expat Scots and Scots-Americans, the notion of Burns Supper without haggis is as unthinkable as Thanksgiving without turkey.
According to custom, the haggis should be paraded into the room with a bagpiper before Burns' poem Address to a Haggis is recited and the dish is served as the main course.

and how do you eat haggis?

And NadiaArumugan discusses the dish, and includes this recipe gif. 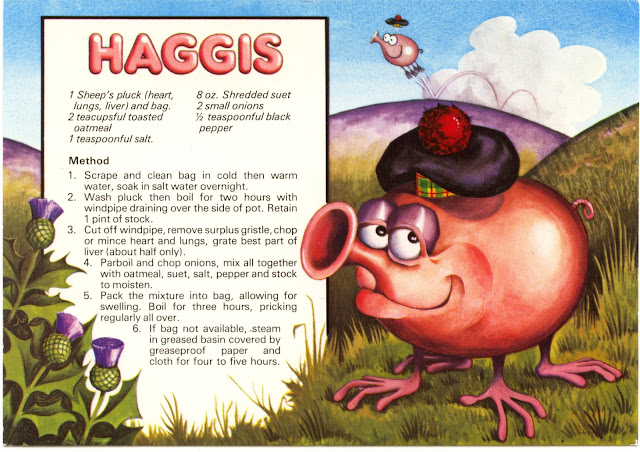 But here, the "pluck" of pigs or beef is made into Bopis. and the link includes photos. In Pampanga the dish is called Pulutok.