Skulls and Hips and Cradleboards

One of the amusement of studying ancient history is how all those sophisticated Yanks seem to think "primitive" people are stupid, so anything they don't understand is attributed to "Aliens". As Chesterton once quipped: Once people stop believing in religion, they start believing in anything.

So now a tabloid is claiming an alien like skull was found in New Mexico. 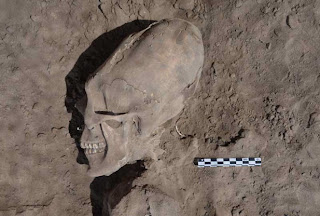 Reality check, please. A lot of Native America tribes practices skull shaping, including those in Meso America and those along the Pacific coast of Canada.


And Sci-Ence blog has this drawing to show how they did it...the first drawing, with the slanted board, would result in that type of skull.

a longer version of this was posted at my bnn blog.
Posted by Nancy Reyes at 12:02 PM

Email ThisBlogThis!Share to TwitterShare to FacebookShare to Pinterest
Labels: medicine