Weird stuff below the fold

DessertComesFirst Blog explains how to open a durian, a hard shelled fruit that smells like hell and tastes like heaven: 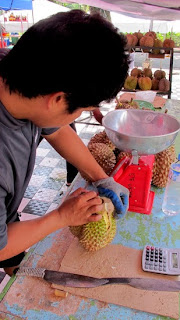 A few nicks are made on the bottom of the durian and then the natural grooves on its husk are scored...When that’s done, all that’s needed is to pry apart the various segments. I make it sound easy – wish it was – but those thorns are sharp and the shell itself is stubborn. Ah, the toil before the sweet!

Jellyfish blooms—the term for giant swarms of jellyfish—have also been responsible for nuclear shut downs in California, Florida, Israel, Scotland, India, and Japan, where one plant has reported removing as much as 150 tons of jellyfish from its system in one day. In 1999, a jellyfish bloom clogged the cooling system of a major coal-fired plant in the Philippines, leaving 40 million people without power. And in 2006, in a nigh unprecedented act of aggression, jellyfish in Brisbane, Australia, afflicted the massive nuclear-powered USS Ronald Reagan with an "acute case of fouling," clogging its cooling systems and forcing it to leave the harbor.


they report the blooms may be getting worse from ocean pollution/acidification, and that the Koreans using robots to remove them and links to a film showing this.

RedCookNet says: well, maybe we should eat them, as Asians already do.

Vikings are "In", so here is a review of the latest Viking movie: Made in Malaysia...

Cats in medieval Europe: Although some literature suggest that they were considered as companions of witches, a closer look suggests that the claim by usually feminist cat lovers that they were hated by all and usually exterminated seem to be cherry picking the information to support their screeds.

Dogs were preferred over cats, who often were disliked for being sneaky and sly, but they were often kept by nuns as pets (the original cat ladies?) and valued for their mice catching abilities. 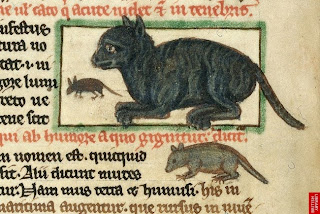 
The researchers found that throughout time, the people on the island consumed a diet that was mainly terrestrial. In fact, in the first few centuries of the island's history (up to about A.D. 1650) some individuals used Polynesian rats (also known as kiore) as their main source of protein. The rat is somewhat smaller than European rats and, according to ethnographic accounts, tasty to eat.


Stink Yourself Slim is a spray that smells like a skunk and it’s supposed to help you lose weight by making you completely lose your appetite. The creator Alex Fontaine came up with the idea when she was at an outdoor party that was crashed by a skunk who ruined the buffet.


on the other hand, if stink kept you from eating, no one would eat a Durian (see above).