We usually watch the BBC for news, and local stations for local news, but Lolo was watching CNN about the latest plane crash.

But there is good news: You just won't read about it in the press.

Guess what? Crime is down.

Despite the dissatisfaction with the police in Missouri and New York, murder rates in America are actually at historic lows.   “The number of homicides in the United States’ biggest cities hit record lows again in 2013 as the murder rate nationally continued to drop to levels not seen since the 1960s,” writes Time. Every year the numbers drop ever lower.

The trends in air travel are even more dramatic.  Airplanes are now so safe that some analysts say that pilots are losing their skills. “In 1959, as the jet age was only beginning for passenger airplanes, there were 36 fatal accidents in every one million departures, according to a recent Boeing Co. report. That quickly plunged to 2.4 fatal accidents in every million takeoffs by 1969. In the past decade, the fatal accident rate for airlines hasn’t been higher than 0.6 per million flights.”


yeah. A lot safer than my driving.

and guess what? A lot fewer wars out there: 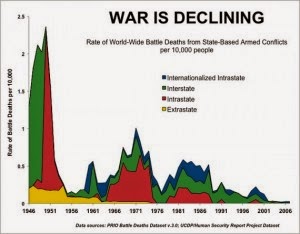 Their article on the wars of the world in 2015 and then notes:

Even with spectacular (at least in the media, which is no accident) threats like ISIL and Russia in Ukraine (and threatening to use nukes, wars continue to decline in number and intensity. Those that still exist get lots of publicity because that’s what the media does. But overall there are more conflicts ending (via negotiation, mutual exhaustion or one side actually winning) than new ones getting started. And new wars are more frequently quickly addressed with peacekeeping efforts. This is all a post-Cold War trend that has been going on since the 1990s. Let us hope it continues.
Most current wars are basically uprisings against police states or feudal societies which are seen as out-of-step with the modern world. Many are led by radicals preaching failed dogmas (Islamic conservatism, Maoism and other forms of radical socialism) that still resonate among people who don't know about the dismal track records of these creeds. Iran has replaced some of the lost Soviet terrorist support effort. That keeps Hezbollah, Hamas, and a few smaller groups going, and that's it. Terrorists in general miss the Soviets, who really knew how to treat bad boys right.


and their podcast this week discusses what they see in the year 2015.


GetReligion links to an article from AlJazeerah on a church laundry day. Twice a month they rent a laundromat so the homeless can do their clothes for free. And they don't just "help the (faceless) poor" but actually make friends with them.

NASA image of the day:

NGC 6535, a globular cluster 22,000 light-years away in the constellation of Serpens (The Serpent) that measures one light-year across.
Globular clusters are tightly bound groups of stars which orbit galaxies. The large mass in the rich stellar centre of the globular cluster pulls the stars inward to form a ball of stars. The word globulus, from which these clusters take their name, is Latin for small sphere.