China and Russia behind fake news on covid vaccine?

.....
Austin Bay has two articles that discuss the problem: Why the KGB and China are spreading misinformation about western vaccines

Twenty-first-century Chinese and Russian lies have become both more pervasive and more sophisticated in targeting audiences with disinformation that seeds fear, doubt, despair, anger and confusion.

Russian and Chinese smears have a marketing angle. Russia is peddling its Sputnik V vaccine as a medically equivalent alternative to the Pfizer and Moderna vaccines. It isn't. China touts its Sinovac vaccine, which is about half as effective as Pfizer and Moderna.

and in another essay, Austen Bay discusses the anti Trump paranoia behind the anti vax campaign: because it was a triumph of American ingenuity but to admit it might help Trump in his campaign.

The internet and social media organs explode to the point of bloat with hot accusations and denunciations regarding vaccine effectiveness. Some of the anger and rebukes may be fed by Chinese, Russian and Iranian disinformation campaigns. I'll discuss those in an upcoming column. There is evidence the Chinese and the Russians are attacking Western-developed vaccines so they can scare the susceptible and sell their suspect potions to poor and desperate nations. As far as the CDC is concerned, Moderna and Pfizer have proved their worth.

Sigh.
Alas, one that sees these stories picked up by more than those who hate Trumpieboy: right now the anti vax propaganda is being spread among the "trad catholic"community, who should know better since Catholics have run a large percentage of hospitals in both the USA and in Africa and Asia, and have been at the forefront in vaccination programs and/or training local personnel so they can help their own people.
(been there, done that).
This is why I say that this whole kerfuffle is nothing new. When I worked in Africa, we had this type of disinformation spread in the communist inspired media (e.g. radio or via communist anti government types): who claimed we were helping the government commit genocide against the locals.
This type of rumor encouraged atrocities against mission clinics, but that was okay because the ones behind the rumors hated Christian missionaries.
When I worked in Africa, those atrocities were by communists, but now we see the Islamic crazies picking up these rumors, so voila, a mullah reads anti vax propaganda and preaches vaccines are evil, and then they kill the doctors/nurses etc. who are giving out vaccines to save lives, even when those doctors and nurses are good Muslms.
But don't blame the Mullahs: African bishops bought the rumor that giving tetanus vaccine in prenatal clinics (to prevent neonatal tetanus, alas a common problem) was poisoning moms and causing miscarriage: the evil HCG in the vaccine rumor that has been going on in a dozen separate countries since at least the early 1990s.
Sigh.
But why condemn the mullahs or the African bishops when they read these "Facts", not just in local papers but on western newspapers who repeat these lies.
Right now, the crazies are saying the same thing about Bill Gates for helping fund vaccine programs that had been going on for 30 years before his money helped them to expand.
He is for population control, ergo his shots must be evil. But the dirty little secret is that if a mom knows all of her kids will live to grow up to be adults, she doesn't have to have 8 kids: She can limit her family to 2 or 3, send them to school, and become more prosperous. So by saving the lives of children, you actually decrease the population increase. But it's easier to say evil evil than to see the big picture.
And no, I don't like the New World Order puppet masters, but the paranoia is out of bounds here.
A lot of the nonsense is quoting "facts"taken out of context, or  claiming thousands of deaths from "vaccines", without any evidence. It used to be the left greenies doing this, but now the Trad Catholics are joining the hysteria. I discuss one such study pushed in a trad Catholic site here. Fifty years old, small numbers, and never replicated.
A variation of this is the hysteria about the Dengue vaccine here in the Philippines: Poor screening meant that kids who should never have gotten the vaccine did get it and a half dozen died. As a result of the hysteria, a couple hundred kids died because they didn't get measles or other vaccines.
But what about the Dengue epidemic in the Philippines? Did deaths decrease?
But of course the background of that is a question if someone was bribed to let them use poor kids in Manila as guinea pigs.
and from a public health standpoint, cleaning up the water in the ditches to kill mosquitoes might have been a better alternative.
Sigh.
Trust is a delicate thing. The black community in the USA still distrusts the medical profession, partly because so many docs talk down to them, partly because they don't have regular doctors so have to rely on a stranger in a crowded clinic (who often is a foreigner who might not understand cultural nuances in the inner city community) but a lot because of the Tuskegee experiment back in the 1940s.
Sigh.
But now distrust is spreading into all authority figures
One example: the AstraZeneca vaccine.
AGGH> BLOOD CLOTS (mainly in young women, but not a peep if any of the victims were on medicines such as birth control pills, that also cause blood clots).
I have an illustration, but for some reason Blogger won't let me post it.
here in the Philippines, they have decided after a pause to use it, but only to give it to the elderly, so we got the shot here.
and in Bulacan, which has been in quarantine and has many cases, Joy's father got the Chinese vaccine. Because it is better than no vaccine at all.
Dirty little secret: Without vaccines, the economy stays shut, and people will die: Of infections they can't fight off because of malnutrition, of undiagnosed or undertreated cancer or high blood pressure or diabetes.
Malnutrition and poverty is terrible right now, and the only reason there is no revolt here is that ordinary folks still like Duterte.
Duterte, knowing the USA and their "human rights"types are trying to destroy him has tried to make nice with China, importing a lot of their vaccine to save lives here, but alas ordinary folks just don't trust China.
In Manila, stories are saying a lot of folks are waiting for the Pfizer vaccine, and not getting the Sinovax version: no one here trusts the Chinese because China is the source of shoddy goods and fake medicines, and lies about a lot of things while trying to steal our fish and territory in the West Philippine Sea.
But why is our social media is full of stories about problems with the western vaccines, but not the Chinese vaccine? Duh. Wonder where all those rumors in the social media came from?

So again we circle back to "Cui Bono": "who benefits" from the anti western vax rumors.
Well, the anti vax activists get ego gratification they are wonderful for their tweets etc.
The Chinese get to keep the economy shut down so they can bribe countries with their lousy vaccine and act aggressively against Taiwan, Japan, the Philippines, Viet Nam and India, all without being in the headlines.
The Russians? They too have a vaccine, but hey, they are mainly spreading rumors because they hate the west.
Sigh.
the anti vax movement goes back over 100 years. It was a cause by the back-to- nature/vegan/vegetarian/socialist/anti vivisection types (e.g. George Bernard Shaw who opposed small pox vaccine) who hate all modern medicine.
link:

Resist the forcing of dead corruption into the blood of children.”— Homer Bartlett Wilson“It is no longer medicine but for the most part destruction.”— William Young

As governments began to compel their citizens to be vaccinated, resistance to the procedure grew. Anti-vaccination societies became especially vocal during the late nineteenth century. Many anti-vaccinators believed that vaccination was, as George Bernard Shaw put it, a “filthy piece of witchcraft” which did more harm than good. 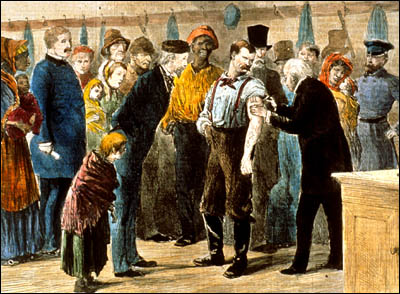 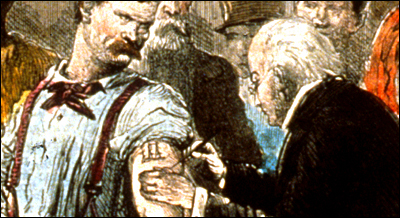 Governments often provided vaccination free of charge to the poor.

Opponents of compulsory vaccination were varied. Some saw the issue in terms of civil liberties, arguing that governments should not force citizens to undergo any medical treatment against their will. Others believed vaccination was dangerous, insisting that “thousands...are killed annually by vaccination.” And still others, especially in India, found the use of a vaccine derived from cows to be unacceptable. 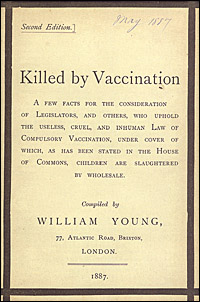 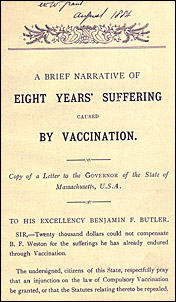 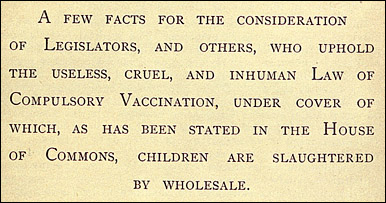 * * * We like to think that we make up our own minds. That we make our own choices — about how we spend our time and money; what we watch and wear; how we think about the issues of the day. But the truth is, we are influenced into these choices. In ways large and small — and often invisible. Some of this influence may be harmless, even fun; and some of it isn’t harmless at all.

Stephen DUBNER: You make a really provocative but resonant argument that a lot of behaviors are copycat behaviors, including workplace or school shootings, terrorist attacks, product tampering. What should media outlets do about those events? You may say their coverage is dangerous. They say it’s their duty to cover it intensely. Why are you more right than they are?

CIALDINI: Because of that last word, “intensely.” They give us the news. They are invaluable for that. The problem is when they sensationalize it for ratings. That bothers me because the actions described are contagious. We’re seeing it right now with shootings, just a cluster of them. One after another after another, because people are learning from the news what other disturbed people do to resolve their issues.