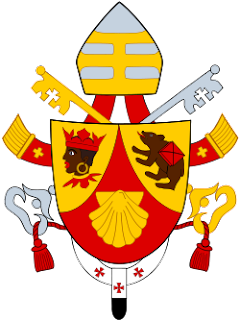 Heh. The Pope's coat of arms includes a bear, a shell, and a crowned African.

The African is the symbol of Freising Germany, and probably is based on either the one Magi who was supposed to be African, or on St. Maurice, a Roman soldier from southern Egypt, (hence, a "Moor") who was martyred nearby.

The shell is the symbol of a pilgrim and of baptism, and the bear is a symbol of the bishop who converted Bavaria.


St. Maurice is the patron of the infantry and of the mountain troops.

(and is traditionally invoked if you have menstral cramps, but no one says why)...
Posted by Nancy Reyes at 7:55 PM