The first Folsom point was discovered by a black cowboy

The Folsom type site is a bison kill site, in Wild Horse Arroyo near the town of the Folsom, New Mexico. It was famously discovered in 1908 by the African-American cowboy George McJunkins,

so how big were they:
29.3 mm in length, 22 mm wide at the center and 20 mm wide at the base.
the Clovis projectile was discovered by a Native American kid. 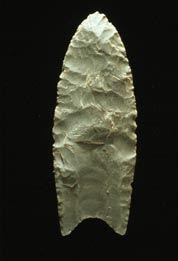 Clovis points are the characteristically-fluted projectile points associated with the North American Clovis culture. They date to the Paleoindian period around 13,500 years ago. Clovis fluted points are named after the city of Clovis, New Mexico, where examples were first found in 1929.[1]

so who used them?

Folsom points are found widely across North America and are dated to the period between 9500 BC and 8000 BC. The discovery of these artifacts in the early 20th century raised questions about when the first humans arrived in North America. The prevailing idea of a time depth of about 3,000 years was clearly mistaken. In 1932, an even earlier style of projectile point was found, Clovis, dating back to 13,500 years BP. Clovis points have been found in situ in association with mammoth skeletons.[2]

I'm listening to Prof Carter's lectures
Prehistory and the Birth of Civilization (feed),

alas the webcasts often remove them from the site quickly so I didn't link it at the side.
Posted by Nancy Reyes at 4:28 PM